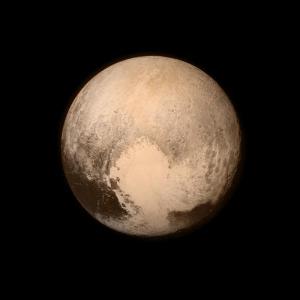 We did it! Today, the first emissary from the Planet Earth came within 8000 miles of the furthest planet (call it what you want to) of the Original 9 in our solar system. That is quite an achievement, especially considering that we only launched New Horizon in 2006 and made it  there in just 9 years. Could you imagine having kids along on that trip? And the fact that is might have been running Windows Vista in its onboard computer? Talk about a long shot!

I usually like to write long, wordy posts about the things I enjoy writing about but this time, I just wanted to mark the occasion of the day we reached Pluto and finally saw it up close for the first time. That to me is amazing to have the planet finally revealed after decades of speculation about it. My encyclopedia from childhood barely had more than a couple of paragraphs about Pluto and only an image of what it was thought to look like. How much things have changed in the decades since.

Although we stand on the shoulders of giants in the history of space exploration, we must not use this as an excuse to stop. We have only scratched the surface of what is out there and what remains to be discovered. Instead, let’s use this as the call to keep going forward and exploring and learning about the universe around us. Let’s go back to the Moon and let’s walk on Mars soon. We know it can be done and we have the know how to get it done.

Congratulations to everyone at NASA that worked on this historic moment. This is your moment in the sun, even if that sun is a distant 3.06 billion miles away from your greatest achievement.

1 thought on “The Final Frontier”