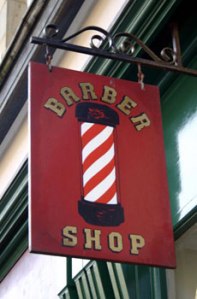 My grandmother’s one attempt in her life to operate an automobile happened before I was even born but I grew up hearing the stories about the incident and the damage she inflicted when she tried to do it. Needless to say, she never attempted to drive a car again and depended on her husband and family members to make sure she got to her appointed rounds each week, of which there were many.

Thursday was a ritual day that rarely ever deviated from a prescribed regimen, one that had been in place for decades. On those days, they would get up and my grandfather would put on his casual clothes rather than work clothes and instead of driving his pickup to the family restaurant, he would take his Cadillac and drive my grandmother to the “beauty parlor”, stopping on the way to pick up my great-grandmother, who lived up the street from them (and who also didn’t drive). My mother’s sister and my grandmother’s two sisters who lived nearby would also plan their morning around this activity so on Thursday you could usually count on three generations of Woodward women all enjoying some good family gossip time while they were having their hair done.

On these days, my grandfather wasn’t allowed to work at his restaurant, Fresh Air Barbecue, although he could go down there and sit and drink coffee if he wanted to-he just couldn’t work and get dirty on those days and he did a pretty good job of following those instructions. If I was out on a school break and happened to have spent Wednesday night with them, then I would usually be brought along on these expeditions when I was a child.

Bear in mind please that I never set foot in the beauty parlor and to the best of my memory, neither did he as there was some unwritten Code about that in the South so I would go along with my grandfather to the restaurant or, if it happened to fall on the right date, to Mr. Roy Prosser’s Barber Shop, located just one block over.

Mr. Roy’s Barber Shop was an exclusively all-male domain. In all my years of getting haircuts there, and Mr. Roy had given me my first one ever, I never once saw a lady enter the place; again, this was against some unwritten Code, known but never spoken of. If the spouse of one of Mr. Roy’s patrons happened to be shopping around the corner on the square and it was time to go, she would walk by the front window until her husband obligingly got up and met her outside to go home.

Large plate glass windows peered out onto Third Street, allowing the bright sunlight outside to swallow up the dim glow of the fluorescent bulbs that buzzed from within the long, hanging light fixtures that hung over the two barber chairs. Behind them were large mirrors that ran along the wall with a full length shelf that held an assortment of interesting things like combs, shaving brushes, lather cups, hair cremes, Vitalis hair tonic, skin tonics, scissors and a large cup full of bubble gum.

The place always had a nice clean aroma comprised of a mixture of all these tonics, after shave lotions and shaving soap. The floors were tile in contrasting light and dark green and a row of chairs upholstered in plain but serviceable green vinyl lined the wall along the wall. A large variety of magazines was always there, usually about cars, hunting, fishing and sports, as well as an assortment of newspapers like the Jackson Progress-Argus, the Atlanta Journal and the the Atlanta Constitution. For a young boy, there was plenty to see and hear at Roy Prosser’s barber shop.

Usually when my grandfather got a haircut, he made sure I got one as well and the ritual became very familiar to me. I would almost always go first and Mr. Roy would put a long padded board over the arms of the barber chair and lift me up to sit on the board, which ensured that I would be up high enough. Then he would put a piece of tissue paper around my neck and pin the barber frock around me to keep hair off my clothes and he would proceed to cut.

For someone who was never good at following directions or sitting still, I always managed to display exemplary behavior in the barber chair, being completely still and moving my head in whatever direction Mr. Roy guided it because I had been told that little boys who didn’t sit completely still might risk having their ear cut off by the scissors if they moved. Mr. Roy and the other barber, Gene Singley were both great multi-taskers because they could cut hair and carry on a great conversation with customers in the store, most of whom were invariably older men who were either retired or who set their own schedule like my grandfather did.

Jokes would fly as hair was snipped, and casual snickers would sometimes give way to raucous laughter as some of the more colorful “characters” would tell something that I didn’t necessarily understand but that the older men in the store found extremely funny. Mr. Roy would never miss a beat in the conversation and he never once cut my ear off, although he did nick it once. This just strengthened my resolve to remain absolutely motionless during the ritual monthly shearing.

When he finished snipping, he would bring out the clippers and cut precisely over my ears and trim the back of my neck and when it was all done, he would remove the barber frock with a sweeping flourish, making sure all the cut hair wound up on the floor and not on me. The last part of the ritual was the fun part-he would take this big air hose hooked up to a compressor somewhere in the building and blow all the loose hair off my face and my ears. Sometimes the pressure was so great that I thought it would take my face off but it never did.

He would then dab a little talcum powder on the back of my neck with a soft brush, comb my hair back in place and give me the reward for good behavior, which was a piece of bubble gum from the large cup on the shelf by the mirror. Having finished the ritual and earned the reward, I was finally free to get down off the board and go sit in one of the soft green vinyl chairs, chew my gum and watch while he performed the same ritual on my grandfather’s hair.

There were times that my grandfather could be a different person than the man I always saw around his family members. The barber shop was where this transformation usually happened, when his normal reserves would slip away and his humor and wit, which were never far from the surface at any given time, would manifest themselves. It was here that I saw him laugh loudly, poke fun at others, occasionally tell an irreverent joke or talk openly about politics or taxes or whatever else was on his mind. In my memory, a good man always, but the barber shop truly brought out his best and let it shine for an hour.

The previous night’s baseball game would be dissected and evaluated in detail or Uncle Billy’s most recent fishing trip would be the topic of that day’s discussion and the size of the fish caught would grow through the conversation. During the course of our time there, customers would come and go, some having finished before we got there but who decided to stick around for the conversation and fellowship. Some came in and just sat and talked, not even getting a haircut but just wanting some face time at the all-male enclave on Third Street….all were welcome and for those who were waiting, everyone seemed to know their turn in line.

Occasionally, one might be in a hurry with a pressing engagement elsewhere and the courteous customers never seemed to mind letting him go ahead of them as it just gave them more time to engage in the atmosphere around them. As customers came and went throughout the day, the conversation was like one big revolving door that started in the morning and concluded at the close of business and I have no doubt that Mr. Roy Prosser knew more about what was going on in Butts County than any other person alive because he was central to this day-long ritual of conversation.

I realize today how lucky I was, because I was allowed to witness and be a part of a ritual that was already at its zenith then, a throwback to the old days, and an era that was about to end. Small town barbershops began to fade out not long after that, to be replaced by the styling salons like the ones most men go to now. A true barber shop is a novelty today.

The barber shop was a place where men could go and be free to talk about whatever they wanted to, however they wanted to. Jokes were passed, wisdom dispensed, advice was given to young boys (who actually listened) from older men who had seen it all, unsolicited advice to be sure, but appreciated. Sports were discussed and yes, the weather was ALWAYS a topic of conversation somewhere along the way. It was always the “hottest summer on record”, or “we need rain” or “we’ve had too much rain”, so on and so forth.

It brought out the best in those that stopped by and was probably therapeutic for those that needed some couch time to be in the company of others with similar problems and the answers to everything. I learned all kinds of valuable lessons about life from those seasoned pros. I rarely ever fished but I think I could have done it just from hearing those fish stories.

I learned that you never take a hot radiator cap off until the car cools down….always put your parking brake on even if your car is in park….Coca-Cola will remove battery acid buildup….a hot wet towel on the face before shaving makes it easier….don’t open a CocaCola bottle top with your teeth…it’s a disgrace to have a pocket knife with a dull blade….how not to flood a Snapper riding mower that doesn’t want to crank…and many more that I won’t repeat here.

Those older men were a part of my younger life and good memories like those stay with you. Every one of those old men are gone now and I miss them today. They were dispensers of wisdom and humor, examples of hardworking men with an ethical core second to none and they were giants to a young boy like myself. Even the building is gone now, torn down to make a parking lot a few years ago but if I know Mr. Roy, I’d be willing to bet he has a barber shop in Heaven and one would only have to walk through the door to find him, along with all those men, my grandfather included, sitting there and swapping fish stories, telling tall tales and dispensing worldly advice, joking and laughing until the end of days.