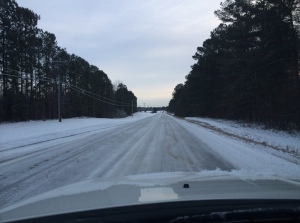 Southerners like things that are cold. This is a known fact. We like “iced” tea, preferably of the sweetened variety and “ice” cream, preferably homemade but we’re not that picky. We like our air conditioners in the summertime and our cold beer on a hot afternoon. Most of us love snow too because it is something we experience rarely and therefore appreciate more than our northern neighbors do. I would even go so far as to say that when snow actually does happen, many of us abandon the common sense we usually exhibit and thus open ourselves up to the scrutiny and criticism of others who know how to handle snow situations far better than we do down here.

Most of the stereotypes have a smattering of truth to them. Southerners apparently do crave French toast during such events as we tend to overrun the local grocery stores at the first suggestion of trouble to stock up on milk, eggs and bread. Once these items have been secured, we close down the schools and send thousands of excited children home to stare out the window and wait for that first snowflake to appear. Eventually, something resembling one falls and the children are sent out wearing things we usually can’t even find in the closet most of the time, like mittens and gloves, scarfs and toboggans, boots and heavy coats.

Unlike the north, when we have a snowfall, there usually isn’t enough on the ground to make a decent snowball, much less sled or make a snowman. We rely instead on “snow collectors” such as cold automobile hoods and trunks, trampolines, wooden decks and anything with a flat surface above the ground to gather enough snow to make putting all those garments on worth the effort. This is how our southern snowfalls typically run, although there have been exceptions over the years.

What Southerners don’t like cold and iced is their roads, driveways, bridges and parking lots. We acknowledge our failure when it comes to driving on frozen roads but that doesn’t stop us from trying to prove to the rest of the world that we can. Up north, chains are used for tires when snow gets deep; down here, they are used for pulling people out of the ditch when they slide sideways down an embankment. Our parents used to warn us when we were “skating on thin ice”, which we came to associate as “almost in trouble”. Driving on thin ice has pretty much the same meaning, as you are never far from trouble when you are on it.

On any given snow day, you can count on seeing an assortment of Jeep-branded vehicles, 4×4 pickups, and even tractors out and about looking for drivers that thought they had the right stuff to tackle the frozen roads. Some make a few extra bucks for gas but most do it to be good Samaritans and for the thrill of engineering a vehicular extrication with the skill of a neurosurgeon.

Southern kids on the other hand love the snow or anything frozen coming down. They know that the instant it is sighted, school will be closed and they have an unscheduled day of fun ahead. Still, for kids and parents in the big city, it wasn’t all fun and games this time.

As a friend who lives in the far north pointed out to me, the downside of snow and ice in the South is that it quickly reminds us how vulnerable we as human beings can be and how dependent we are on things to work as they should. The case of what happened in Atlanta this week is a prime example of that and there are lessons to be learned from it but there are also many lessons of humanity as well.

When I first heard that things were going south in Atlanta faster than the temperature was falling, I tried to put myself in the place of a parent who was separated from their child. Stuck in traffic and unable to reach them, knowing their children were stranded somewhere on a road in a school bus with temperatures dropping rapidly had to be a nightmare for many. I read of one father who, knowing their five-year old would be afraid sleeping overnight at their school, walked in that weather five miles so that they could stay with their child. We put our child on a school bus every morning to ride 15 miles to school and I can only imagine what I would feel like knowing my child was stuck on a bus and we were unable to get to him.

I thought about the people who left work, some two million cars all trying to pour out of Atlanta at the same time while the snow fell, clogging the streets and our obsolete, antiquated interstates that run through the downtown area. When vehicles began to slide and lose traction and when busses and big trucks could not get up hills, the entire city became gridlocked and people became stranded, unable to go forward, backwards or anywhere else. Cars ran out of gas, people ran out of patience and many ran out on their cars, seeking shelter where they could find it.

Road crews couldn’t treat the streets because they were covered in cars. Cars couldn’t move because the streets were covered in ice. In the span of a few hours, what amounted to a couple of inches of frozen stuff paralyzed the entire hub of the southeastern United States. Soon the comparison photos surfaced of Atlanta in a scene from “The Walking Dead” alongside of a similar Atlanta photo of everyone trying to get out of the city and no one trying to get into it. The Atlanta TV stations played up both the hype and human interest stories, trying to compete with hundreds of thousands of social media postings. News spread faster than anyone could process what was happening. The rest of the state was pretty much ignored as everyone focused on the story unfolding in the urban core.

Fortunately, the icing of Atlanta brought out the best in a lot of people and not the worst. Folks opened their homes to complete strangers and gave them shelter from the cold, provided them a hot meal and a place to sleep. Restaurants gave out food and people who could get to stranded motorists brought bottled water and fruit to those who wouldn’t leave their cars. A baby was even safely delivered on Interstate 285.

The National Guard helped get stranded children back to their parents and teachers pulled double-duty, bunking down with their charges overnight in schools. I’m sure none of them got much sleep. Fortunately, no one, either here or in Atlanta, was killed and injuries were at a minimum. Most importantly, everyone finally got home from work or school, some of them 18 hours after they started.

I’m fortunate to live in a smaller county that is close enough to Atlanta to be there in under an hour on a good day, yet far enough removed from the urban sprawl not to be bothered with it. I spent most of the snow night out with the public safety and road crews, checking road conditions and helping law enforcement get unlucky motorists out of ditches. Unlike most of my co-workers, they didn’t get a snow day with their families and they didn’t get hot meals on a regular schedule but I do hope they got thanked by someone during their time out answering needs.

I was lucky to have a Jeep to use even if it was only a two wheel drive and thankful I was taught how to drive on snow and ice when I was young. Even so, I experienced a few instances where I was steering one way and the Jeep was happily going off in another direction. We call this “snowdrifting” and one can’t and never should underestimate the hazards of ice, whether its two inches or ten.

While there are some technical points to doing it, the key is to drive slowly and refrain from doing something stupid. Forget braking for animals that might run out in front of you too. On a snowy southern road, its either you or them and your life is worth more than iced roadkill any day. If you know you are going to have stop up ahead, pretend you are flying a 747 and give yourself plenty of room.

So yes, I freely admit that while (many) Southerners can’t drive on snow and ice, when the white stuff comes, we make the best of it and deal with it the best way we know how. We look after each other. We help those that need it and we enjoy watching it and admiring the beauty it can bring. We cook chili and vegetable soup and drink hot coffee and hot chocolate. We’re glad to see it come and usually glad to see it go too. And we try to find the humor in the situations it brings.

One of the more amusing moments I had was stopping to check on a stranded motorist who had gotten off of the clogged interstate and decided to go the back ways to avoid problems. They had run off the road and had called for a tow truck which arrived a minute or two after I did. I noted with a smile the Michigan license plate on the back of the car. Seems like there is at least one northerner that can’t drive on it either 🙂 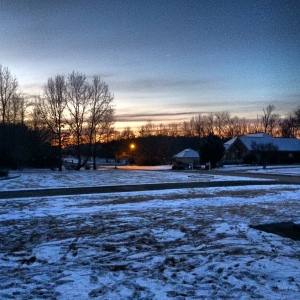 At the end of the day, it was pretty, it was dangerous, it was fun and it was fleeting. Praised by children, cursed by adults, especially those who had set up house along the interstate through Atlanta. By  sundown, my son and all his friends had pretty much trampled it to death and even the appeal of snow had worn off for the most part…but one of these days, maybe in two weeks or two years, snow will visit again and we get to do it all over again. Lets hope the next time it comes, everyone is safely at home and can enjoy the fun of flakes and not the fear of freezing.