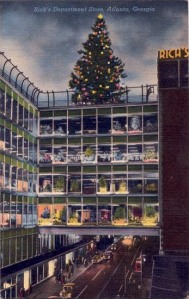 Whenever the Christmas Holidays approach, I can’t help but think of Rich’s Department Store. If you’re from the South, specifically from anywhere near Atlanta and are above the age of 40, Rich’s will be a familiar name. When I was growing up there was no other store like it and and Rich’s was the place to shop in Atlanta. The problem is that I didn’t appreciate it then. Time has a way of changing things and this is especially true of the perceptions I had as a child because I never gave Rich’s the credit I give to it today for being a truly unique shopping experience. My mother made sure I had many opportunities to try though, at both the Downtown Rich’s and Rich’s at Lenox Square.

Memories of going with her to the Magnolia Room for example. I remember a coconut cake served there that could easily give my grandmother’s a run for its money. I remember both my parents taking me to the downtown store to ride the Pink Pig at Christmas. I even remember some of the people that always seemed to be the ones to wait on my mother when she shopped. Mrs. Lyons in the shoe department at the Lenox store was one such example. She had at least two pins affixed to her name badge shaped like a golden peach that I think signified that she had been a loyal Rich’s employee since Rich’s was called a dry goods store.

I don’t have anything against Macy’s and I do go there from time to time but I suppose I never forgave them for retiring the Rich’s name in favor of their own. Once Rich’s was gone, it just wasn’t the same anymore. Macy’s in New York, where we took our son a couple of years ago to see Santa Claus comes fairly close but in Atlanta, Rich’s was as much a part of the Atlanta landscape as the statue of the Phoenix that used to be in downtown…and come to think of it, Rich’s bought that statue, known as “Atlanta from the Ashes”, which is considered the symbol of Atlanta.

People went to work for Rich’s and stayed there until they retired. Like Mrs. Lyons, it wasn’t unusual to see a salesman or saleslady with a quarter of a century or longer working for the company. Customers sought out “their” sales associate and those associates not only knew their customers but would call them when items came in that they thought their customers would like. Mrs. Lyons was a frequent caller it seemed when shoes in my mother’s hard-to-find size came in. Rich’s during those years defined exemplary customer service, something that is sorely missing in many of today’s shopping emporiums. 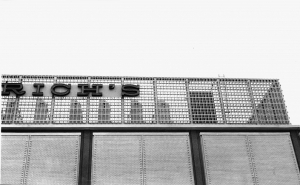 It’s funny the little details that I can remember even today about the Lenox Square store of that time. The solid brass door pulls as you entered the store were fluted with an acorn-like attachment on the top and bottom, conveying longevity and solidity. The children’s play area, where parents could actually leave their children for up to two hours while they shopped and not worry that something would happen to them. The beautiful wood and glass display counters, filled with all kinds of watches that fascinated me. So much has changed and so little is left there to remind me of it. 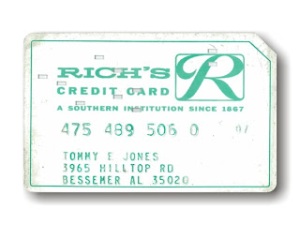 I also remember off-the-wall things like the odd looking white plastic charge cards that Rich’s used with the “R” logo printed on it, like the one in the picture. My mother would take hers out and they would put it into this pressing machine and push down on it to make an impression of the card on the receipt. Her cards always had traces of blue from either ink or carbon paper (not sure which) that got on the card from use over the years.

My brother and I used to enjoy riding the escalators at Lenox up and down and we would go from the ground floor all the way up to the top and back down again. Sometimes, in the waning hours of the day when the store was about to close, we would try to run up them in the wrong direction. I remember almost making it to the top once when someone got on and we had to reluctantly ride backwards to the bottom again.

Rich’s always decorated to the hilt for the holidays, transforming the store into a glittering display of greenery, lights and packages wrapped like presents. Parents from all over brought their kids to ride the Pink Pig on the top floor and you could waste an entire day seeing it all.

The downtown store was even more fun than Lenox because Mom would take the elevators from one floor to the next. People would get on and off while we rode and we would try to guess what was in the shopping bags that the passengers carried with them. At Christmas, there was all the hustle and bustle of the season wrapped in a downtown store that carried anything you might hope to find under the tree on Christmas morning. I remember seeing Santa Claus a time or two and marveling at all the cool stuff in the toy department. It was always a happy, if tiring day visiting Rich’s in either location and I still have my Rich’s Santa Claus, complete with his Coke bottle in hand, to remind me of those days. Some traditions outlive the institutions from which they came.

The Rich’s Great Tree is a good example of that. It was a sight to see, perched on top of the bridge between the main store and the store that sold furniture. I never got to actually go to a tree lighting but I don’t think I ever missed seeing the ceremony on TV, nor actually getting to see the tree itself at some point during the Christmas season. It was a symbol of Atlanta and of the holiday season for a number of generations and even though the tree has been moved to Lenox Macy’s, its roots are firmly planted in Rich’s history.

My Dad didn’t go with us much but when he did, the shopping trips always seemed to be a little quicker and more purposeful, no doubt due to his insistence that Mom not browse as much as she usually would. If we went downtown to shop, we usually went somewhere close by to eat like Ichiban’s Japanese Steakhouse or to the Polaris at the Hyatt Regency. Rich’s was always a part of that experience too. 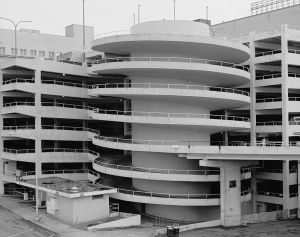 One of the fun things that he did was to see how fast he could drive down the spiral parking garage. The exit to the downtown parking garage at Rich’s had this amazing corkscrew exit ramp that you got on and circled around and around until you got to the bottom. Dad would always drive too fast coming down and my brother and I would be pinned by lateral G-forces to the right side of the backseat as he went around and around. In hindsight, I can’t be sure if he drove in such haste because my brother and I enjoyed it so much or if he was just in that big of a hurry to get out of department store. Either way, we enjoyed it and we looked forward to that part of the experience as well.

Businesses come and go but some gain such longevity that they become an institution, weaving their history into the fabric of the community that they serve. Like the small stores in my own hometown, the large ones like Rich’s became a part of the Atlanta region and flourished for well over a hundred years, investing in the city as the shoppers invested in the store. Relationships between customers and those that saw to their needs are the stuff of legends in today’s era of self-service and you have to know where to go to find that level of customer appreciation. Back then, you knew to just go to Rich’s. 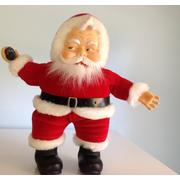 Today Rich’s lives only in memories and old photographs, a relic of a bygone era when the customer was always right and a business stood behind what it sold. Many of the buildings that once bore the name still carry on but under the names of other stores that are a shadow of what Rich’s was to Atlanta and to the people who frequented it. Still, when the Christmas season is nearly upon us, I can remember all of those things that made it such a neat place to go and wish that I could go back to Rich’s one more time. It was a special place. It was the Store of the South.

53 thoughts on “Rich’s Was The Store of the South”