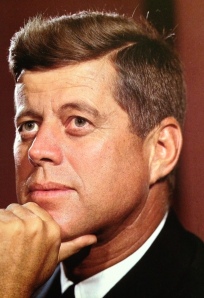 Presidents of the United States come and go, most of them after four or eight years in office depending on re-election cycles or the incumbent’s desire to actually seek an additional term. Nine of them left before their term was complete, one from resignation, four who died in office from natural causes and four whose lives were taken from them. If you ask most people to name Presidents that were killed in office, most will not recall President James Garfield or President William McKinley but most everyone will know the names of President Abraham Lincoln and President John Fitzgerald Kennedy. It is Kennedy, his life, his death and his legacy that the world focuses on today and who is the subject of my writings and reflections.

Kennedy’s assassination, a half century ago, still resonates with Americans today because many people are still living that remember the event. He is still part of the present because of this and probably will be until the last person who either knew him or who was touched by the events that happened on November 22, 1963 is gone. Even so, it will probably take longer than that because so many like myself, who should have been born during what would have been his second term in office, were deprived of sharing in the “Camelot” era that his presidency has become known as.

Even though I never lived during that time, as one who enjoys writing I thought I should  commemorate this major anniversary that has brought so much of what was good (and not so good as well) about the Kennedy presidency back into the forefront of public consciousness. In the 237 years since the founding of this great experiment called the United States of America, we have born witness to astounding triumphs and shattering tragedies but in the Presidency of John Fitzgerald Kennedy, we experienced both and as a nation, we were changed by it.

Some might find it unusual that I would write a remembrance about a man that died two and a half years before I was born but JFK wasn’t just any man and in all of my studies of past Presidents of the United States, no other has been the focus of so much of my interest as this one has. When I came along, his senseless murder was still fresh in the minds of my parents and their generation, as well as their parents and grandparents. America was still mourning a loss, not just of a President but of a time and an era that people still look back on today with a sense of nostalgia, as if the innocence of the country had been lost. His slaying in Dallas 50 years ago today is an event that deeply affected millions of people and which occurred at the precipice of an unprecedented change to the social fabric of our country. 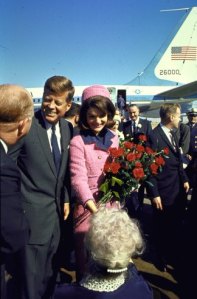 His presidency was the shortest in modern times, yet his loss brought the focus of that presidency into sharp definition and it is through that magnifying glass that he has been remembered by those who experienced it. Those who preceded him in violent death are remembered only in black and white photographs set in a time so far removed from today that we can’t relate to them like we do him. Television and film, color photography and the setting of an earlier, yet modern America have all come together to give Kennedy a sense of being a part of a not-so-distant past. We still relate to him, many still remember him and many can recall conversing with him. He is, in a sense, more real to us today because of that.

What history has also done, as it tends to do, is to paint a perfect picture of a presidency that was certainly not perfect and even though we know a lot more today than we did then, we have collectively decided to focus on the very positive things he brought to his presidency and to our nation…and that is fine with me because the things I have always found so inspiring about JFK are the things that I would have chosen to remember him by had I been a part of that time or even if he had lived into my own.

While he suffered setbacks such as the Bay of Pigs fiasco, and while it took him a while to fully get on board with the necessity of civil rights, his triumphs were extraordinary and enduring. The Cuban Missile Crisis brought the world to the brink of destruction, yet Kennedy came through as the victor, a picture of calm leadership in a crisis that struck fear in citizens around the world.

His soaring, rhetorical speaking abilities energized a nation looking for new directions, while challenging us to push the boundaries of new frontiers such as space exploration and the moon. His words stirred within us a desire to put the bad things of the past such as war behind us and to look toward a brighter future of building a nation where peace would reign, prosperity would flourish and excellence would become the rule and not the exception.

While his inaugural address is certainly one of his most famous and well known, it was his speech at Rice University that I still find to be stirring and challenging and the results of that speech were in full bloom by the time I came along and for several years afterwards:

“We choose to go to the moon…we choose to go to the moon and do the other things, not because they are easy but because they are hard” he said that day, and the nation responded. It was that speech on that day that resulted in one of the most significant achievements of mankind that occurred in my lifetime, nearly six years after his death. We marshaled the forces of human intellect, expanded the horizons of scientific knowledge, pushed the boundaries of our limitations and we all, as a nation, went to the moon.

As one of our most literate and well-read Presidents, he introduced a level of culture into our national consciousness that unleashed the arts on society. While this was also due in no small part to the influence of his wife, Jacqueline, it gave America a new basis in culture that had been sorely lacking before they came along. He challenged us to look within ourselves and to find the best attributes of being an American and my parent’s generation rose to that challenge. He spoke of an America that had unlimited potential in human achievement and he made us believe that our time had come.

So much of what he and those whom he surrounded himself with put into motion during those few years of his presidency continued after his death and, in large measure, despite his death. Yes, he was an imperfect man and his morals were not always what they should be but I think we tend to see the best in Kennedy because he made us see the best in ourselves and we believe he saw the best in us as well.

My son went through a phase where he was fascinated with the Presidents of the United States and he learned a lot about them during that period. Kennedy became someone he was particularly interested in because he had come to know that two things from the 60’s had always been favorite subjects of mine: Kennedy and the Apollo Moon program. We talked about both and I even gave him a little book about Kennedy that he read and which is put away now until he is older.

Two years ago, we travelled to Washington DC and among the many things I wanted to do while we were there was to take a trip to Arlington to see the final resting place of Kennedy. This was high on my list. When we entered that great, vast cemetery, we reminded him that he had to be respectful of this place and what it stood for and he seemed to understand. We climbed the hill and eventually came to site.

We were not alone as we stood on that rise, feeling the chilled wind blowing in from the Potomac and causing the eternal flame on Kennedy’s grave to dance and flicker. Others stood there, quietly and respectfully, taking in the hallowed sense of the place that we stood, among soldiers, statesmen and the 35th President of the United States. My son wandered around the site, looking at the flame that burned in the shadow of Arlington House up above and against the backdrop of Washington DC down below.

I wrote about this a few years ago but it still moves me today. When I turned back to see what he was doing, he was off to the left side of the gravesite, by himself, in a kneeling position and just looking at the burial site and watching the flame that stood against the wind. He remained that way for several moments, just lost in thought.

I’ve often wondered what he was thinking in that moment. What thoughts could have possibly be going through the mind of a seven year old kneeling at the grave of a President that he had only come to know through old pictures, stories I had told and and images on YouTube? Whatever they were, the image was profoundly powerful and moving to me.

Such was and still is the power of John F. Kennedy, the man and the President, that his life and even his tragic death still moves people in such ways. We mourn for him today, for what he was, what we lost and what might have been. We never got to see him grow old. We never got to see him face failures that might have come in a longer life. We only know that for a brief and shining moment in our history, that we were moved to greatness by one who had the power to bring out the best in us. That is the way we should remember him today. That is the way I will remember him.

6 thoughts on “One Day in November: Remembering JFK”