It is true what they say about time…it does go by faster the older you get. The year 2011 may have been 365 days long but in the stream of memory that runs through my head, it came, it visited and suddenly, it was over. I decided to test what my memory had to say about it so without looking at my digital appointment book for the past year, this is about all that I managed to remember about 2011 without cheating:

• It snowed once
• My Dad turned 65
• We had a windstorm that destroyed our son’s trampoline
• We just missed being run over by an F-4 tornado
• I turned 45
• Two of my mentors retired this year. One passed away weeks later.
• My son lost his first three teeth.
• Our local bank closed and some good employees were displaced
• I attended the Atlanta Symphony 4 times
• My son played his first season of soccer
• My cousin got married, resulting in my first trip to Ohio
• We took a trip to Kentucky and got stranded on the interstate
• We had a nice vacation in Washington DC
• Thanksgiving and Christmas
• I gave up on BlackBerry and got a white iPhone.

I look at this list and wonder “is this really all I did in an entire year?” I know that doesn’t even scratch the surface but it also reminds me that much of what we do every day is mundane enough that it doesn’t really even warrant an engram of memory in the vast archives of our brain…it’s just another day…but still, one should be able to bring up more than what I mentioned above. There had to be more than that to 2011 so I decided to look at the year from the perspective of my datebook and see what I might have overlooked and came up with some more things:

• My father lost a pet that he loved very much.
• I had to have a root canal (how did I forget that?)
• I got to be a part of rededicating our 100 year old Civil War monument
• My son, aged six, ran the Macon Cherry Blossom 1m race, placing 3rd.
• The Royal Wedding and the death of Osama Bin Laden
• We took our son to the World of Coca-Cola and the Georgia Aquarium
• I helped break ground on a multi-million dollar medical technology center
• I was selected addmitted to the Georgia Academy for Economic Development
• I went to the 10 Year Anniversary ceremony of the 9/11 attacks
• A few hundred other items.

I know that as you age, your brain becomes more and more stuffed with information and that at some point, usually in your 30’s it reaches the point that it has to start shuffling things around to make more room. Irrelevant facts, minor events and even people you once knew pretty well begin to get lost in the shuffle. All of a sudden, 365 days of full, rich and treasurable LIFE get squashed down into what seems, at my age, to be a few months. No wonder time goes by quicker when you are older because your brain begins to omit what it deems to be unnecessary or not exciting enough to cause a spike in the life line. Because I took no note of them, they were deemed unimportant and my brain responded accordingly.

My grandfather, the preacher, was the first college-educated person in his family. Of all the things he learned in his quest for knowledge, I think that reading and writing were the two things he valued the most. He was a great communicator and I think part of what made him that way was his ability to absorb everything he read and his love to write and speak. He authored hundreds of sermons, wrote countless letters and after he retired from the ministry, kept a journal for many years.

It used to sit on his desk and each year it was a different one. He would go to the “five and dime” and pick one up when the year was nearly at an end and through that year, he would enter upon its pages all kinds of information that he deemed to be relevant. It had a single page for each day and most of those days he would fill the entire page with his distinctive handwriting. Keep in mind that even though he was educated, penmanship was not his forte and I was one of the few people who could actually read his longhand writing. I used to play at his desk when I would come to visit and sometimes I would sneak a peek into his journal and read some pretty juicy stuff about how hot the weather was one day or that bought new tires for the car and had the oil changed while it was there. Some days he and my grandmother visited with Mrs. Somebody or they visited his mother who lived in Atlanta and things like that. The journal usually didn’t hold my attention for very long, not when there was a 1930 Underwood typewriter to play with and it would go back on the desk shortly after I picked it up.

He never seemed to mind that I read it. One week, the summer before my grandmother passed away, he left to go to annual conference for several days and I stayed with her while he was gone. For some reason, he didn’t take his journal with him and I decided that he would want for me to pick up the torch and keep it going for him. Each evening, I would get the temperature from the thermometer in the garage, sit down at his desk and write down what the temperature was and how the overall weather had been for the day. After the ritualistic meteorological data was recorded, I would then write what had happened during the rest of the day….we went to the dime store, she made cookies, Mrs. Somebody dropped by the house and so forth. I took my responsibilities to the journal very seriously.

Not every day in the journal was limited to a narrative of the weather and who they visited. He wrote other things besides where they ate dinner or where he might have spent money on any given day though. When they took trips, he wrote about the places they went, the things they saw and he would inevitably write something humorous here and there. He took a trip out west with my father once and his description of my Dad’s driving over the Rocky Mountains was one of the funniest stories he wrote about.

Whether he was writing just facts or committing to paper the memories of a particularly notable event is not important; the point of it is that he found value in each day, enough to write something down on every one of them, from the mundane to the momentous. In doing so, he gave each day its own moment in the spotlight and the opportunity to say “I was a day in a life. I may not have been a very important one but without me, yesterday would have been the end and tomorrow would have belonged to someone else”. He knew and valued the gift of time and he acknowledged the source of where time comes from. 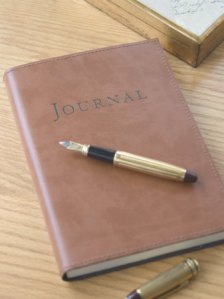 He has been gone a good number of years now but I was fortunate to become the recipient of many of his journals and those that I don’t have, my father does, so a significant portion of his life endures in the things he wrote about the days of his life, and not just his life but those of other people as well. When I received his journals, I made it a point to read them from cover to cover and I discovered the missing gaps that I had not read in my cursory inspections of earlier years. I read about his worries over my grandmother’s failing health. I read about his happiness when I would come to spend a few days with them and how he enjoyed bragging on his grandson, truly a wonderful thing to read about from someone that I shared a close bond with for so many years. I read about the darkest days of his life, after my grandmother went into the hospital for the last time and didn’t come home again. In those months, he deviated from his day to day entries and would sometimes just write from one page to the next, letting it out of his system as he went along. That told me that for him, time had lost all meaning and that the days just ran together during that troubled time. I read about him becoming reacquainted with an old friend who would eventually become his second wife and who gave him something to live for again. I also read of how he thanked God for his blessings.

I don’t know how fast time went by for him as he grew older but I like to think that because he took the time to at least note what each day was about, from the boring ones to the exciting ones, that maybe he was able to slow the clock down just a little bit. He made it a personal mission to acknowledge all 365 days that each year gave to him and to ensure that sometime down the road, someone could know a little something about them, even if it was just to be able to tell what the temperature got to on the 4th of July in 1975 or whether Christmas 1977 was cold or not. He made sure that many elderly shut ins were acknowledged by visits, that a good set of tires could be had for well under $100.00 and that he had a special place in his heart for his grandchildren. He is probably the reason that I started keeping up with at least the highlights of my week, if not the minutia of my days. Perhaps I am missing the point myself and I should do more and try to look for one special or memorable thing that happens each day and jot it down in digital ink in my calendar program. Maybe that’s the secret of a longer life or at least a fuller and richer one, to acknowledge each day we are given and to be thankful to Him who gives them to us. 2012 is as good a year to start slowing down the clock as any I think.