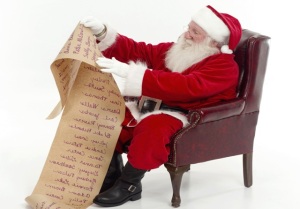 Dear Santa Claus,
I know you haven’t heard from me in a long, long time. I mean really, I am 45 years old now and most kids my age have dropped off your radar a long time ago but just in case you are still listening, I have a few items I would like to put on my Christmas list in the hopes that you might have kept me in the system somewhere. I heard that you had upgraded from Elves to a MacBook and that this has really streamlined your operation as far as keeping tabs on who’s been naughty and nice. I want to say for the record that I have tried to stay on the nice side as much as possible this year, despite having wanted to strangle a few people and missing church more than I should have. You won’t hold that against me, will you? Anyway, here is my list for this year: